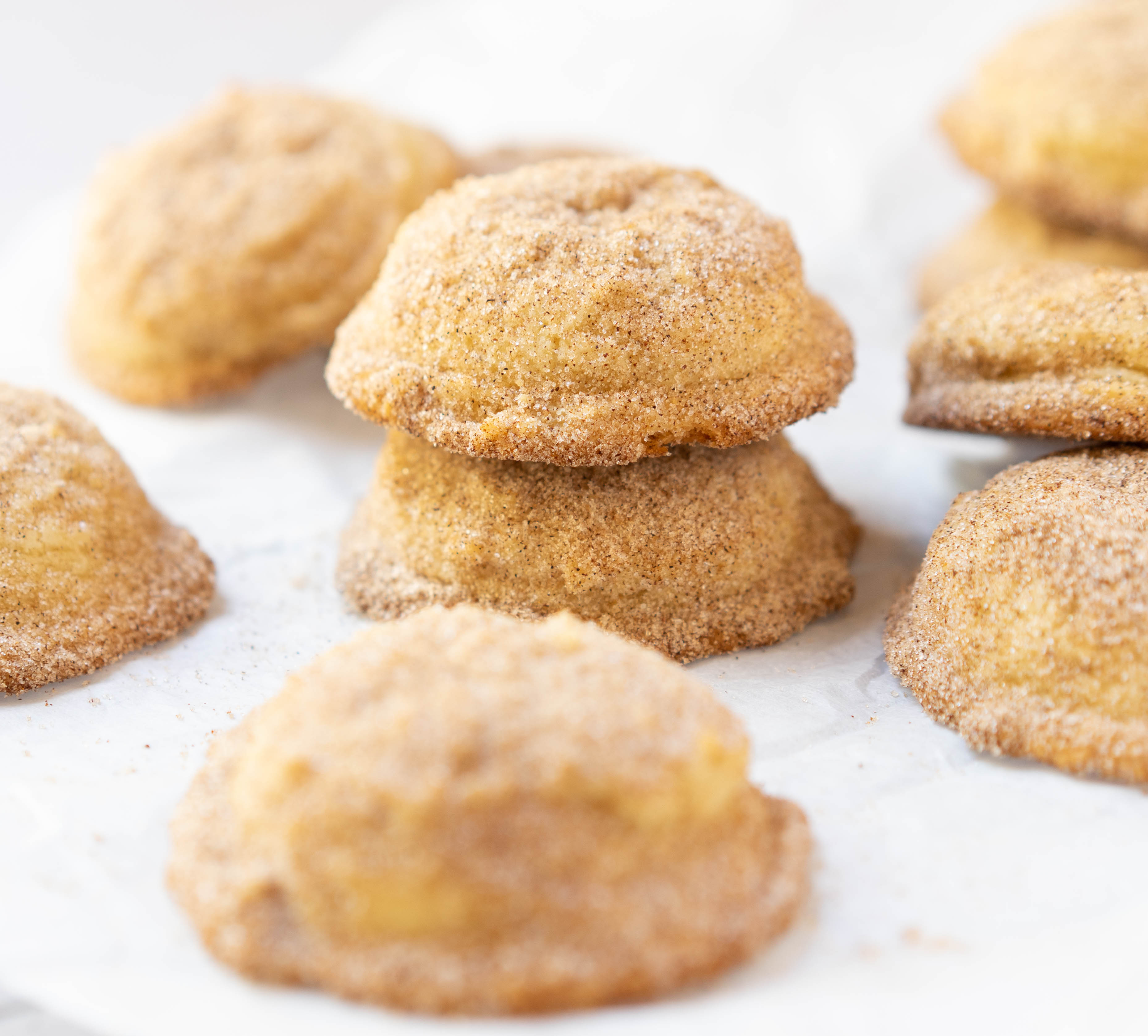 Mexican vanilla and cinnamon on the inside, cinnamon and sugar on the outside. This cookie is soft and packed with flavor, and pairs perfectly with your morning cup of coffee.

This cookie has a lot of names and variations if you search ‘Mexican cinnamon cookies’ online. Truth be told I never paid attention to the name growing up when my mom would take us with her to the pañaderia (Mexican bakery). I just knew this cookie was one of the many I hoped she would buy for us. Years later when I first began baking, this was one of the very first recipes I ever made. My mom had a handwritten recipe shared with her from years earlier, and she had it tucked away in a drawer with tons other recipes.

I’ve been making the recipe my mother has written down on a yellowing piece of paper for at least 20 years now. I’ve made it for family, friends, and coworkers. I’ve brought it to parties, gifted to others, and also hoarded an entire bake all for myself. I can’t count how many times I have made this recipe because it is truly my favorite recipe – ever. If I find myself too busy to make a batch then you can find me at my local La Monarca bakery picking up a box. I can devour a box if I was throwing caution (and my diet) into the wind. They are just the most delicious cookies to me.

This recipe is not the exact recipe from the one my mom has written down. I’ve modified it ever so slightly through the years, but I promise you they are worth every calorie.

Notes Prior To Baking

Cinnamon: ahh, canela (aka cinnamon). Mexicans use it in so many dishes to enhance flavors, such as mole, horchata, and – you guessed it – cookies. Canela (or cinnamon) is not the same in the United States as the one used in Mexico. Rather this cinnamon is a bit milder with a subtle floral flavor. It is meant to enhance the richness of the dish, not overpower it. Mexico uses cinnamon from Sri Lanka or Madagascar, where as the United States imports from China, Vietnam, India or Indonesia (source). You can find it in your local Mexican market as Canela, or online as Ceylon Cinnamon. For this cookie I highly urge you to use the the cinnamon (canela, Ceylon cinnamon) as used in Mexico.

Shortening: no butter in this recipe! This recipe utilizes shortening instead. Such a crucial ingredients because shortening is what helps this cookie maintain its tall structure but still produce a very soft and light cookie. That being said, NO SUBSTITUTIONS!

Storage: you can freeze these cookies in freezer safe ziplock bags or containers for up to 3 months. They also store well in ziplock bags at room temperature for about 5 days.

Tools For The Job

Processing…
Success! You're on the list.
Whoops! There was an error and we couldn't process your subscription. Please reload the page and try again.

Sharon Alvarenga
Mexican vanilla and cinnamon on the inside, cinnamon and sugar on the outside. This cookie is soft and packed with flavor, and is one of my favorite Mexican cookies.
No ratings yet
Print Recipe Pin Recipe
Prep Time 15 mins
Cook Time 15 mins
Total Time 45 mins
Course Dessert, Snack
Cuisine Mexican
Servings 12 cookies